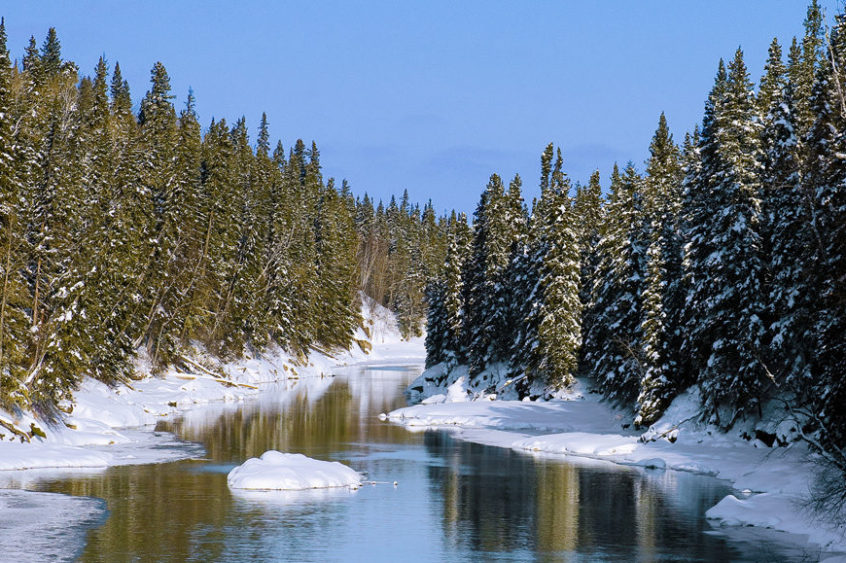 Manitobans sought refuge from the stress of a pandemic this summer by connecting to nature in our many spectacular parks. Campsites were full. Hiking trails were crowded.

As the 2020 season came to an end, the government issued a request for proposal examining ways to potentially decommission provincial parks while also seeking greater “financial sustainability” for the parks that remain.

The controversial proposal drew an immediate backlash from Manitobans: more than 700 of whom participated in a CPAWS Manitoba letter-writing campaign to Defend Manitoba Parks.

Some 105 people joined a CPAWS Manitoba webinar Parks Over Profits, in which Executive Director Ron Thiessen spoke about the implications of the controversial government proposal and what Manitobans can do to remind the province that parks are for people — not for profit.

The event also featured Chris Smith, Parks Coordinator with CPAWS Northern Alberta, who gave an update on devastating cuts to park services in Alberta, which is currently in the process of shedding 175 parks.

Here are the responses to the questions that came up.

1. What does Manitoba’s government need to hear in order to prevent devastating changes to our parks?

The Manitoba government needs to hear that our parks are not for profit. The gap between park revenues and operating expenses is rightfully adopted by Manitoba’s provincial budget because the social, cultural and environmental values parks hold are critical to our well-being.

Our parks need to be managed by the public government for the benefit of all Manitobans. Giving ownership or management of our parks to businesses or other groups could lead to barriers that exclude many from using them. Manitoba’s parks are for all Manitobans.

CPAWS Manitoba is pleased with recent commitments for investments to improve our parks. Increased investment is required to ensure our parks are well managed and safe for all Manitobans.

Expecting park visitors to shoulder the financial burden of park management is bad policy. We saw a drastic loss of services in national parks — including well-loved cross-country trails in Riding Mountain National Park — when the previous federal government made revenue generation a priority in national parks.

2. Does CPAWS Manitoba have a template for letters for its campaigns, including Defend Manitoba Parks?

Yes, we have letter templates. On our website — cpawsmb.org — we have a link to a letter-writing tool for our campaigns, including for Defend Manitoba Parks. You can send the letter as is or you can individualize it by adding your own comments, which is even more effective in making your concerns understood.

3. Who should people send letters to expressing concerns about the government’s parks proposal in Manitoba?

Letters should be directed to Premier Brian Pallister as well as to your member of legislative assembly (MLA). You can write the same letter to send to each of them using our online form.

4. Do you know which parks in Manitoba are being targeted for “divestment” as part of the government’s proposal?

As the assessment has yet to be done, that information is not yet available. The assessment conducted by the private firm that the province commissioned will likely reveal this information.

Yes, that’s a very good point. We certainly don’t want to create a scenario where tourists are avoiding Manitoba due to high costs or other barriers. It’s important to note that every dollar invested in parks returns $6 to the Canadian economy, according to a study by the Canadian Parks Council.

6. All revenue collected by Manitoba Parks is funneled into general revenue. Why are we not pressing the government to put the funds back into the parks?

This is a great question and a challenging one. What is paramount is that parks receive the funding they need to be well managed and maintained. It’s key that the allocations from the provincial budget are aligned with what’s needed to achieve these outcomes. As park revenues will never compare with the financial expense of operating them, it’s essential that we resource our parks adequately so they remain a fundamental core of our health and well-being.

7. In Manitoba, who could potential park-operating partners be? Aren’t municipalities facing their own financial crunch? Who is indicating they can — and want — to take this on?

These partners could be municipalities, First Nations, businesses and other groups. To our knowledge, no group or entity has indicated that they want to take on this responsibility.

8. What aspects of provincial parks in Manitoba and Alberta could be “privatized”?

In Alberta, it would be mainly campgrounds, but essentially anything that the government could make revenue from could be privatized.

This can be a slippery slope, which is what CPAWS Manitoba is worried about happening in this province. For example, if the campgrounds then the cabins, yurts and interpretive programming were all privatized, many Manitobans who currently enjoy those services at an affordable or free rate would be priced out of embracing the provincial parks that we hold so dear in Manitoba.

9. With this proposal, could there be a potential impact to leased cottages in Manitoba’s provincial parks?

The current lease system drastically reduces the cost of cottage ownership, which makes access to nature more accessible to Manitobans. It ensures that the land remains owned — and regulated by — the province.

However, if the land is sold off, it’s private property. It could certainly be said the cottage would no longer be really part of the park. The cottage could be surrounded by the park but not truly within the park, so it would remove lands from the park in that way. It would also minimize or diminish the opportunity for other Manitobans who would like their own cottage at some point in the future.

10. How encompassing is the word “protected,” and does the government in Manitoba honour the word?

Manitoba’s protected areas are land, freshwater or marine areas identified for biodiversity conservation where logging, mining, oil and gas exploration and development, hydroelectric development, exploring for and harvesting peat, and other activities that significantly and adversely affect habitat are legally prohibited. Existing rights of Indigenous people are respected in protected areas, which generally remain open to hunting, trapping, fishing and other traditional uses.

It’s important to note that not all of Manitoba’s provincial parks are fully protected areas. Many of our parks include areas within them that are open to industrial developments such as forestry and mining.

11. CPAWS Northern Alberta has been creating lawn signs as part of Defend Alberta Parks. Where did funds come from for the lawn sign campaign?

CPAWS Alberta started with some basic seed money from its general account to get the first order of signs. Since then, the campaign has been funded by public donations. When people order a sign, they’re asked if they want to donate $5 to cover the cost of the signs, and some people donate additional money as well, which allows CPAWS Alberta to expand its campaigns.

12. Have social media platforms helped to gain support for the Defend Alberta Parks and the Defend Manitoba Parks campaigns?

Social media has been a huge driver for the Defend Alberta Parks campaign. CPAWS Northern Alberta is active on Facebook, Twitter and Instagram, and different audiences, depending on the platform, have been interacting with the campaign. Social media has been incredibly helpful to engage with people and to inform them about the parks issue.

CPAWS Manitoba is also active on Facebook, Twitter and Instagram and has used those platforms to share about Defend Manitoba Parks. Social media will continue to be a key way to inform Manitobans about the proposal as details become made available.

13. Eleven per cent of Manitoba is protected from industrial developments. Does this include areas in parks that are allocated to resource management?

Thanks to the efforts of CPAWS and other partners, logging was banned in Manitoba’s provincial parks in 2008, with the exception of Duck Mountain Provincial Park.

14. Besides CPAWS Manitoba’s ongoing campaigns, including protecting the Seal River Watershed and the Fisher Bay Area, what other parks/areas do you hope to see protected/expanded in the future?

The long-term goal of CPAWS is to protect at least half of Manitoba’s wild lands and waters. According to leading conservation science, this is the minimum requirement for ecosystems to remain healthy and fully functioning. CPAWS continues to explore opportunities with governments, Indigenous nations, communities and stakeholders to identify new areas that can be conserved and well managed for the benefit of people and wildlife.

At this time, we are focused on the establishment of a huge polar bear provincial park along the shores and interior lands along Western Hudson Bay. We are also strongly advocating for the federal government to move on its commitment to establish a Western Hudson Bay National Marine Protected Area that would cover a large expanse of ocean and protect a critical beluga whale population. We’re also working to secure permanent protection of the 2,000 square kilometre Amisk Park Reserve north of Thompson.

15. Are donations to CPAWS tax deductible?

Yes, donations to CPAWS are tax deductible. We are a registered charity. You can donate to CPAWS Manitoba here.

16. Has CPAWS Manitoba reached out to the Treaty Land Entitlement Committee about the government’s proposal?

17. Where can I find the slideshow presentations from the webinar?

You can view Ron’s presentation here. CPAWS Northern Alberta has recordings of Defend Alberta Parks town halls plus slides from one of the presentations here. Past slides were used to put together Chris’s presentation at the Parks Over Profits webinar.

You can also view Ron’s and Chris’s slides in the full webinar recording below.