CPAWS Manitoba has been instrumental in establishing 22 new parks and protected areas in our province.

Our work has been possible thanks to the support of tens of thousands of Manitobans who joined the fight to Keep Manitoba Wild by signing our petitions, writing letters and donating their time and their resources.

We are particularly grateful to the many First Nations who have partnered with CPAWS to conserve Manitoba's lands and waters in the spirit of reconciliation.

Canada has entered an unprecedented era for conservation with a federal pledge to protect 25% of our lands and waters by 2025.

A Legacy of Conservation - 22 Parks and Protected Areas

An End to Oil Drilling in Turtle Mountain Provincial Park

Controversial oil and gas extraction in Turtle Mountain Provincial Park finally came to an end after Tundra Oil and Gas chose not to renew its lease in 2020. The Manitoba government used that departure as an opportunity to expand protected areas in the park by changing land-use categories for 5,114 hectares to back-country land use from resource development and recreational development. The change will help the area's moose population recover, the province said in a press release.

Rare plant species were cited as the reason to extend protection to 951 hectares of Duck Mountain Provincial Park, the province said in a press release. While CPAWS welcomes this change in land use designation from resource management to back country use, we remain concerned about the continued logging elsewhere in the park.

CPAWS was instrumental in banning industrial logging in Manitoba's provincial parks in 2008. We remain frustrated that the exception which was written in to allow logging to continue in Duck Mountain has not yet been eliminated.

A sanctuary for Manitoba’s most threatened woodland caribou remains safe—for now.
Thanks in large part to all the people who joined CPAWS’ quest, the Manitoba government extended protection for the Amisk Park Reserve until 2023.

Industry is actively fighting to open the nearly 2,000 square kilometer reserve to mining, with the Manitoba Prospectors and Developers Association warning supporters that “our industry is an at-risk species” and declaring that mines are “as much a part of nature as the water and the animals.”
With pristine lakes, sandy ridges and the heaving shoulders of exposed rock which make our Precambrian Boreal Forest so beautiful, Amisk Park Reserve is the only existing protected area in the Churchill River Uplands ecoregion.

This critical wildlife habitat also offers strong potential for backcountry recreation and tourism due to its pristine state and proximity to Thompson.

CPAWS worked with and coordinated the efforts of regional First Nations and Manitobans to inspire the government to designate 2 new provincial parks. Goose and Grand Islands provincial parks together are made up of eight islands on Lake Winnipegosis, which were nominated for protection in 2001 by local First Nations based on cultural and wildlife values. CPAWS partnered with the Manitoba office of the Wilderness Committee in an effort that resulted in hundreds of Manitoba citizens issuing their support for establishing the provincial parks.

Indigenous people have an ancestral connection with the islands and Lake Winnipegosis as they have used them for thousands of years. Blessed with lush wetlands and mixed forests, the islands are important breeding grounds for a number of water bird species as well as valuable habitat for moose, fox, and numerous songbirds.

We can now count ourselves among the inspiring list of individuals and organizations who have earned this award in the past through their tireless work in wildlife and landscape conservation! 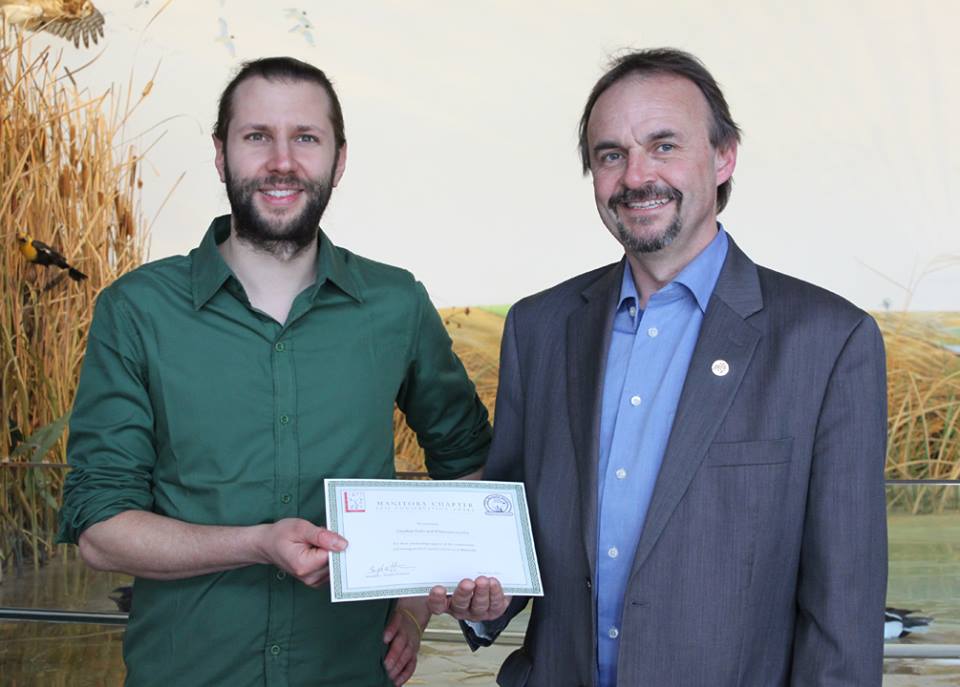 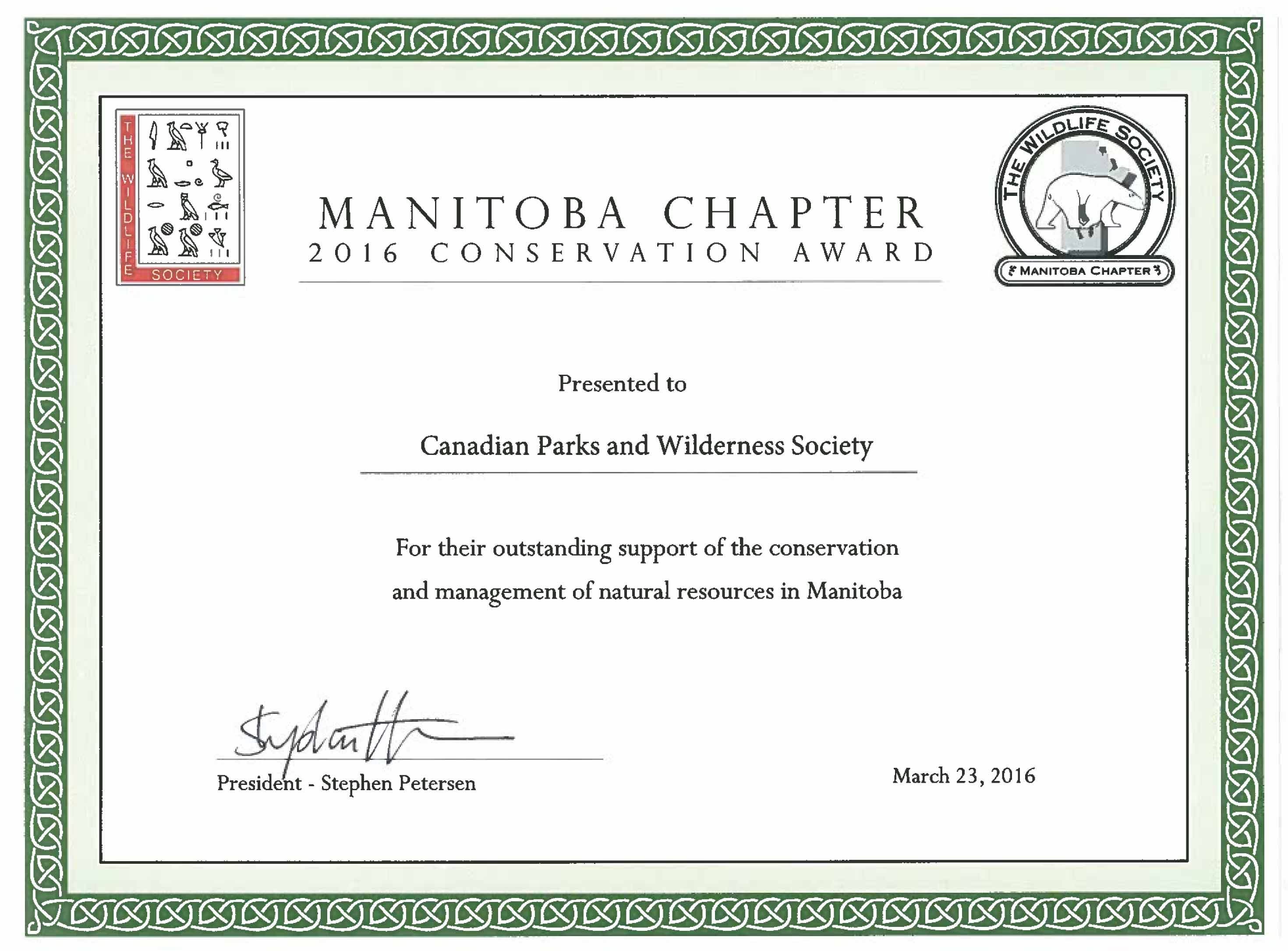 In January 2016, CPAWS joined members of Nisichawayasihk Cree Nation (NCN) and Premier Selinger for the signing of a Memorandum of Understanding (MOU) regarding land use planning focused on conservation and resource management of NCN’s 22,000 square kilometer resource management area within the boreal forest of Manitoba. CPAWS had been supporting NCN’s land use planning with funding and expertise since January 2014. As evidenced by First Nations that have conducted and completed land use plans on the east side of Lake Winnipeg as well as our productive dialogues with many Indigenous, government, and industry leaders, CPAWS believes that Indigenous-led land use planning is a key mechanism for establishing certainty for conservation, sustainable developments, and benefits for local communities in Manitoba’s boreal forest region, which covers about 80% of the province.

In December 2015, Kinwow Bay and Sturgeon Bay, situated on the west side of Lake Winnipeg north of Hecla and the existing Fisher Bay Provincial Park, became two new provincial parks. Proposed by Kinonjeoshtegon First Nation, CPAWS Manitoba was proud to support this effort by ensuring hundreds of letters of support for the proposal were sent to the province. Together the two parks secure over 23,000 ha. of boreal lands from industrial developments while ensuring traditional practices can continue.

The province of Manitoba released a Protected Areas Strategy in November 2015 outlining priority regions within which protections from industrial development will be sought. CPAWS Manitoba Executive Director Ron Thiessen was pleased to contribute -- at the government’s request -- to the development of the strategy, which targets the protection of 17% of the landscape of Manitoba by 2020. The province kick started the progress with the designation of the Red Deer Lake Wildlife Management Area and an expansion of the Lake Winnipegosis Ecological reserve, which brings the current provincial lands under protection to 11%.
“The new protected areas announced today are valuable steps in the quest to conserve Manitoba’s spectacular biodiversity,” said Thiessen, who was invited to speak at the government's press conference.
“It’s been a pleasure to work with the province on a strategy that commits to meeting the international target of protecting 17 per cent of Manitoba by 2020.  We look forward to our continued efforts with the Manitoba government, Indigenous communities and stakeholders to achieve this marker.”

The Manitoba government released its long awaited final strategy to prevent woodland caribou populations from local extinction in October 2015. The strategy incorporates establishing large areas where forestry won’t occur and it exceeds national requirements by committing to protect and manage for 65-80% intact suitable boreal caribou habitat in each caribou management unit. CPAWS worked closely with the province to ensure this would be recognized as a cornerstone of recovery efforts. The final strategy comes on the heels of over 10,000 signatures provided to the province calling for a final recovery strategy that upholds the large habitat protection priority and urged swift, on-the-ground implementation.

CPAWS efforts toward establishing new protected areas paid off as the province is moving ahead toward its commitment to create 10 new or expanded parks by 2020. The commitment is part of TomorrowNow, Manitoba’s Green Plan, which seeks to balance environmental protection with a thriving sustainable economy. The designation of Chitek Lake Provincial Park and the Walter Cook Caves Ecological Reserve move the measuring stick forward toward CPAWS’ goal of protecting at least 50% of our boreal regions from industrial developments to maintain ecological and economic stability as well as the forest carbon reserves that help to buffer against the impacts of climate change.

In April 2014, with considerable involvement of CPAWS Manitoba, the Manitoba government released its draft strategy for the recovery of woodland caribou populations in Manitoba, which identifies the need for large cores areas for caribou where forestry will not occur.

With support from CPAWS, the Manitoba government banned peat mining in parks – a huge leap toward ensuring our parks are healthy for future generations of wildlife and people.

With advice from CPAWS, the Manitoba government adopted a new parks strategy that identifies “maintaining ecosystems” as its fundamental operating principle.

Our Executive Director, Ron Thiessen, was given a Manitoba Eco-Network award in 2012 for his positive contributions, via CPAWS, to awareness and protection of Manitoba’s environment

CPAWS Manitoba inspired tens of thousands of Manitobans to write the Premier to enact large scale land protections on the east side of Lake Winnipeg, supporting the establishment of the Poplar River First Nation’s 800,000 ha traditional area as protected under The East Side Traditional Lands Planning and Special Protected Areas Act.

Through the efforts of CPAWS Manitoba and other groups working toward large-scale boreal protection, Kaskatamagan Wildlife Management Area (259,530 ha) and the Kaskatamagan Sipi WMA (133,820 hectares) were established in Manitoba and provided legal protection from all industrial developments. CPAWS Manitoba inspired tens of thousands of Manitobans to write the Premier to enact large scale land protection on the east side of Lake Winnipeg. This helped to provide the conditions to establish precedent setting legislation and the East Side Traditional Lands Planning and Special Protected Areas Act, which allows indigenous communities to legally protect large areas through land use plans.

Through a CPAWS Manitoba campaign, industrial logging was banned in Manitoba’s provincial parks.

East Side of Lake Winnipeg saved

CPAWS Manitoba, together with local organizations and other groups, convinced the Manitoba government to not run a major hydro corridor through the east side of Lake Winnipeg, which would have run through the largest remaining intact area in North America’s boreal forest.