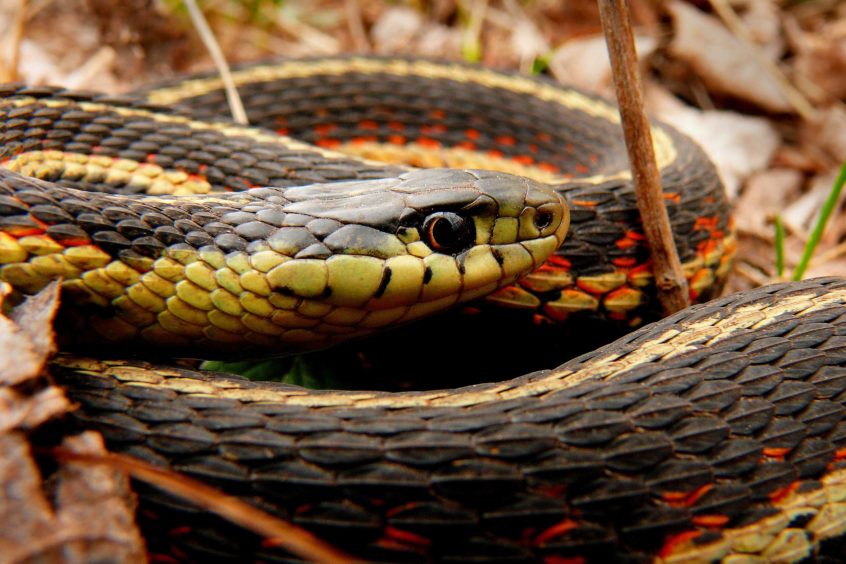 Did you know the biggest concentration of snakes in the world is found right here in Manitoba?

Every spring, the Narcisse Snake Dens come alive with tens of thousands of red-sided garter snakes as they slither to the surface from their winter dens. These snakes are ready to begin their annual mating ritual.

This unique attraction brings researchers, tourists and media from around the world, including the New York Times, Atlas Obscura and National Geographic.

The dens are closed to the public during the Covid-19 pandemic, but Pauline Bloom, regional wildlife manager, took CPAWS Manitoba webinar participants on a virtual tour of Narcisse in a June 2021 webinar, “Manitoba’s Snakes: Exploring the Narcisse Dens.”

A record number of registrants — nearly 900 people — signed up for the free webinar for a chance to see the snakes and learn why they are so attracted to these particular dens in Manitoba’s Interlake region.

Pauline answered dozens of audience questions and offered fascinating insight into the wildlife management area. You can read some of her answers below and watch a recording of the full webinar here.

What Type of Snakes Are Found at Narcisse?

Red-sided garter snakes are the only species found at Narcisse. They’re one of five subspecies of the common garter snake and are distinguishable by the small red bars on the sides of their bodies that run perpendicular to their three yellow stripes. The snakes are dark brown or dark green in colour. They are not venomous and do not have a strong bite.

Why Are There So Many Snakes in These Particular Dens?

The reason for so many snakes at Narcisse comes down to water, food and shelter.

The Interlake region has plenty of wetlands that produce ample food for snakes, including frogs, tadpoles, earthworms, leeches and small mammals.

The region also provides access to winter dens for snakes to survive long, cold Manitoba winters. Cracks in the limestone bedrock have created crevices and sinkholes for them to get deep underground, close to water sources and below the frost line. While down there, the snakes enter a state similar to hibernation called brumation.

What Are the Snakes Doing Each Spring?

The snakes emerge from their dens each May as part of the annual spring mating ritual. The males emerge first and wait patiently for the females to come out. Once they do, a mating ball occurs where one female can be surrounded by up to 100 male snakes. These mating balls can happen on the ground and in trees — wherever the female snake decides to go, the males will follow.

The snakes leave Narcisse and head to their summer feeding areas — marshes, wet meadows, swamps and wetlands — by the end of May. This is also where they give birth before returning to their winter dens for the colder months.

What Are the Biggest Threats to the Snakes of Narcisse?

Predators like crows, ravens, magpies, mink and raccoon can be a threat to snakes if they have nests nearby.

Weather conditions also play a factor. Snakes are cold-blooded and cannot regulate their own body temperature. Instead, they must change environments when they get too hot or cold. Snow, droughts or extreme heat or cold can impact a snake’s ability to maintain a comfortable temperature.

Road mortality is a significant cause of death for the snakes of Narcisse. Snakes like to bask on the warm surface of the roads, particularly in the fall on the way back to their winter dens. This leaves them at high risk of being run over. A fence and tunnel system built along the roads helps prevent them from crossing the road and encourages them to use the tunnels underneath instead.

When Is the Best Time to Visit the Dens?

The latter part of April and the first three weeks in May are generally the best times to visit the dens. During this period, the snakes are preoccupied with mating and are easily viewed by visitors. Sunny days are best for snake viewing, so don’t forget your sunscreen! You can expect to spend one to two hours in the area.

For more information on visiting the Narcisse Snake Dens, visit the Manitoba government website or NatureNorth.