How To Care for Manitoba’s Wildlife 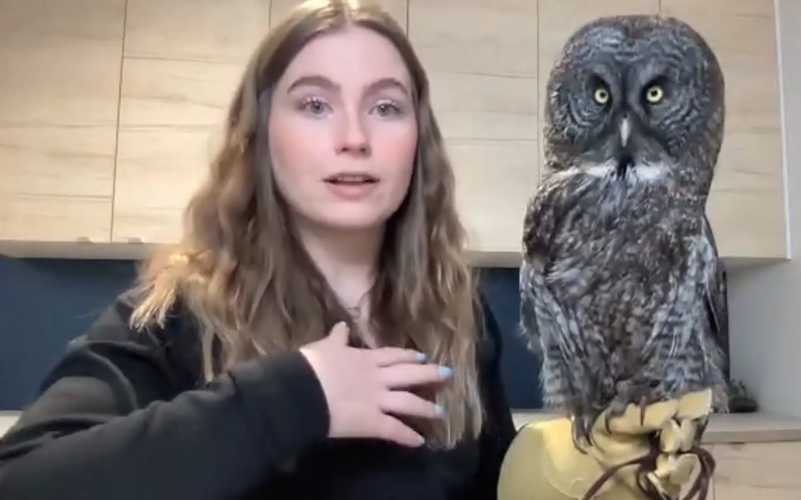 What should you do if you find a sick, injured or orphaned animal in the wild?

Sometimes, the best solution is to wait and see if it really needs help, said Amy Wilkie of the Wildlife Haven Rehabilitation Centre.

The centre takes in sick or injured wildlife (including squirrels, bunnies, songbirds, raccoons, foxes, coyotes, geese, ducks — pretty much anything you’d find in your backyard) and rehabilitates them before releasing them back into the wild.

According to Wilkie, the centre receives many calls about animals that don’t actually need to be admitted. Sometimes, human interference can even make the situation worse.

Wilkie, along with two adorable education ambassadors, offered three important points to keep in mind when encountering wildlife in a March 2021 CPAWS Manitoba webinar attended by more than 100 people.

Wild Animals Are Rarely a Threat — Be Respectful of Their Space

Most of the time when people come into contact with wild animals, it’s because we’ve invaded their space, Wilke explained.

“Wild animals are rarely a threat to humans if we treat them properly — an animal is not going to attack a human just because it feels like it,” Wilkie told webinar attendees.

“But it is going to show aggression if it’s feeling threatened or its babies are nearby. Be aware of your surroundings and aware of what your actions could cause to that animal.” 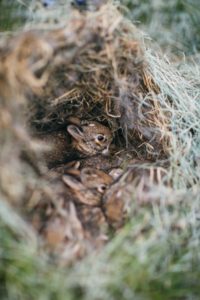 Wildlife Haven houses a lot of wild animals who came in when they simply didn’t need to.

This is particularly problematic during baby season (March, April and May) when people commonly mistake bunnies as being orphaned after the mother appears absent. But mother rabbits will only visit the nest twice a day, usually at dawn and dusk, and only to feed her babies, Wilkie said. Otherwise, she’ll leave them alone.

If you see a nest of babies that you think might be orphaned, contact Wildlife Haven before interfering.

The staff at the centre can offer guidance, including a simple test to determine if there is actually a mother around.

“If you have some string or yarn, you can lay it across the nest in a tic tac toe pattern. Leave it for 24 hours and don’t visit it at all,” Wilkie said.

“Someone has found a raccoon living in their attic, shed or garage, so they call a pest control company to come trap and relocate it. A few days later, we get a call from them saying, ‘I just relocated a raccoon and now I found four babies in my attic.’

“We get so many calls like that. If they had called first, we would have been able to offer tips on getting the mother raccoon to move her den to a separate location, and she would still be with her babies.”

For this, Wilkie recommends taking rags or cotton balls and soaking them in a bit of bleach before putting them at the entrance of the den. The smell of toxins will deter the mother from sticking around, and she may move her nest and babies to a separate location.

Do Not Feed the Wildlife — Seriously, It’s Not Just a Silly Sign

Most of us have tossed bread at ducks or fed a chattering squirrel, Wilkie said. But if you feed animals by hand they can quickly become familiar, and even dependent, on humans. That’s when dangerous situations can arise.

“I have heard some cases where a neighbour is continuously putting out food for deer, and the deer know there is going to be food there every day so they’re crossing the street and getting hit by cars. We really recommend not feeding wildlife at all.”

Wilkie explained that wildlife are perfectly adept at taking care of themselves in the wild — they’ll be able to find food even in the winter months and can easily survive the winter finding their own food. 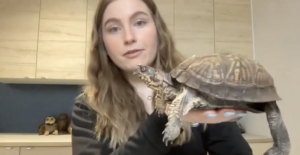 Elliott is an eastern box turtle and one of Wildlife Haven’s education ambassadors.

A Visit With Elliot the Eastern Box Turtle

One of Wildlife Haven’s education ambassadors is Elliot, an eastern box turtle found outside in 2010. Eastern box turtles are not native to Manitoba — or even Canada — so staff at the rehabilitation centre figured it must be someone’s pet.

After putting out a call to the public that went unanswered, they realized Elliot must have been released into the wild on purpose. This is incredibly harmful for a number of reasons, Wilkie said.

“Since Elliot isn’t from this area of the world, he’s not used to the climate or environment, so he probably would not have survived. Elliot is a terrestrial turtle who stays on land while Manitoba’s turtles are aquatic, hibernating underneath the water during winter months” she told the webinar.

“Since he is not native to this area, you’re releasing a non-native species to an environment, and that can cause a lot of damage to the ecosystem.”

As a pet, Elliot could have been exposed to other exotic animals that may have contaminated him with diseases or viruses. When released, he could have infected the native population causing a huge decline in numbers. 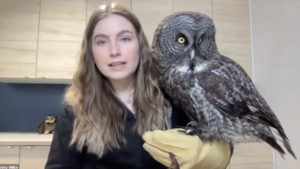 Ash, a great grey owl, was rescued but kept with humans for too long, resulting in her imprinting on humans.

Another of the centre’s wildlife ambassadors is Ash, a great grey owl, which is North America’s largest owl species.

Ash came into the care of Wildlife Haven as a baby in 2018. She was rescued with good intentions but was kept indoors without a proper diet and stayed with humans for too long before being confiscated by Manitoba Conservation (it is illegal to keep wild animals as pets in Manitoba).

This resulted in Ash imprinting on humans, a form of learning that animals do within the first few weeks of development after being born.

“Usually a wild animal will be frightened of humans because they don’t know what we are and they don’t know if we’re going to cause them harm. They will try to stay away from humans as much as possible.”

Unfortunately, Ash is the reverse — she is super comfortable around people and is scared of other birds.

“Since she is so imprinted on humans, we weren’t able to release her in the wild as it can be very dangerous. If someone was walking in the forest and she wanted to land on their shoulder or head, I’m sure that would be quite a shock for the person and that could lead to both or one of them being injured.”

“If her rescuers had known this and called us or brought her to us, we would have been able to rehabilitate her and then release her back into the wild. But unfortunately, they just didn’t really know better. Now, a healthy bird that would have thrived very well in the wild, is in captivity for the rest of her life.”