‘Deadly Rapids’ and Polar Bear Encounters on the Seal River 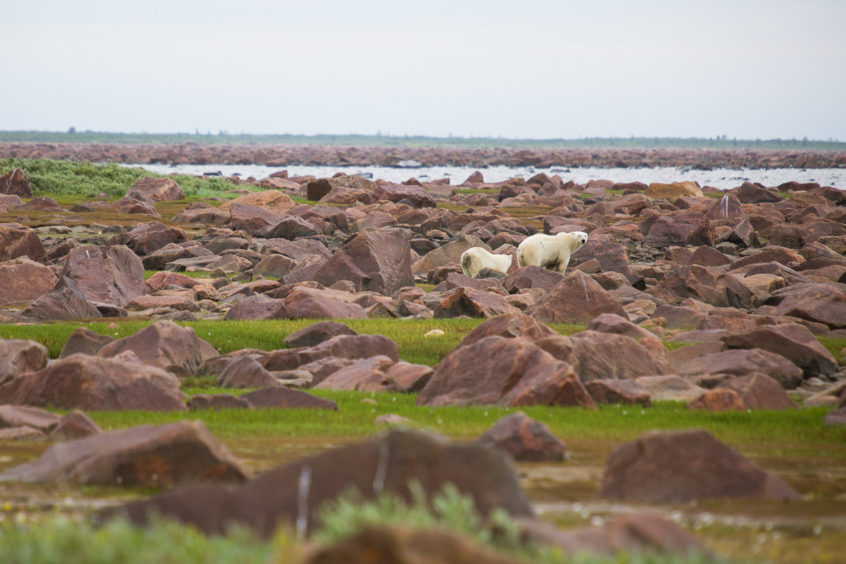 It was a thrilling paddle through large waves, boulders and “water demons” along a section of Manitoba’s Seal River dubbed the Deadly Rapids.

Caroline Wintoniw and her nine fellow paddlers were tired and ready to make camp. But they were in polar bear territory now. So they needed to cook dinner far from their campsite to avoid attracting bears.

As the paddlers explored their dining spot, they saw polar bear tracks. It had rained the night before, but there were no rain patterns on the paw prints — they were fresh. The group continued walking, finding even more tracks and small pieces of seal, leftovers from the bears’ meal.

Sure enough, the crew spotted a mom and her cub in the distance.

“We were so excited to be able to eat our dinner while watching this mom also feed her cub,” Wintoniw said in a webinar about paddling the Seal River hosted by the Seal River Watershed Alliance and CPAWS Manitoba.

But then the bears jumped into the water and started swimming toward the group. Some people had a moment of panic — where are the bear bangers, what do we do? But one of the paddlers told them to relax and watch where the bears were heading.

The bears changed course in the water, no longer swimming toward the crew on shore. 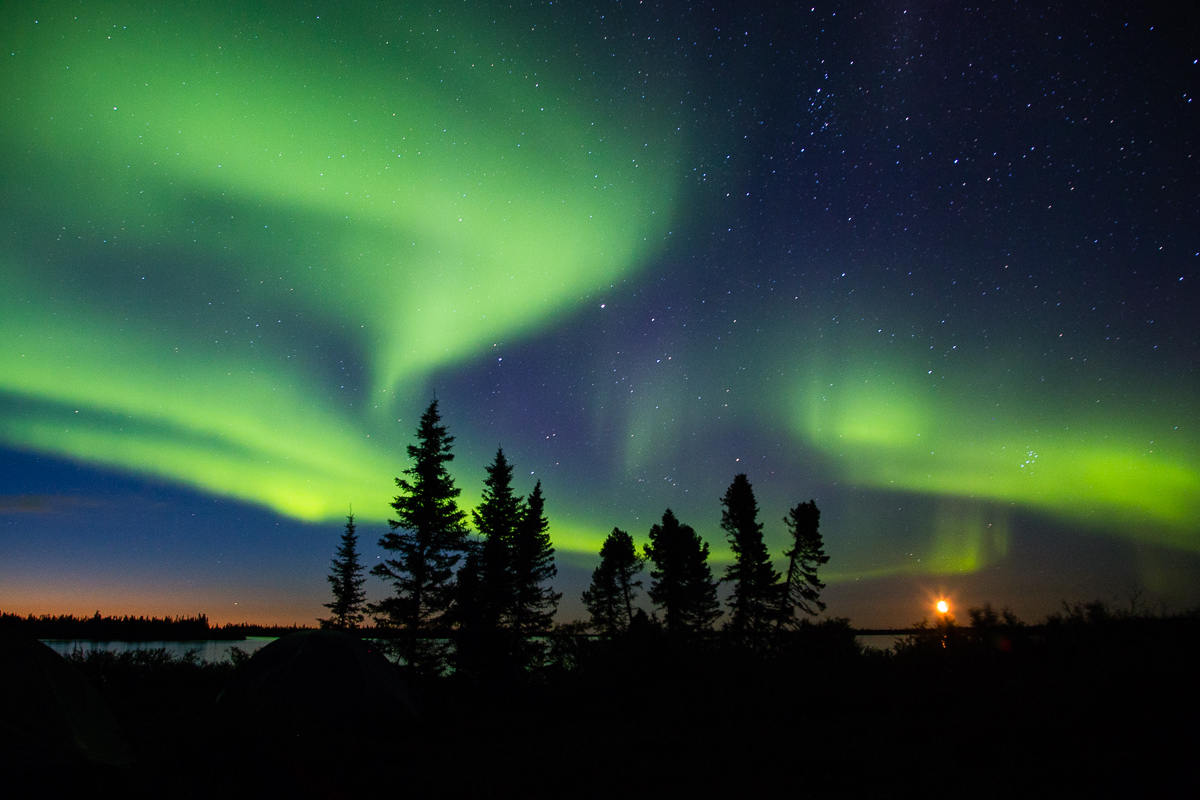 The Northern Lights entertained those on polar bear-watch. Photo by Caroline Wintoniw.

It was a good thing the paddlers spotted the bears on land before they jumped into the water, Wintoniw said. The group may not have spotted them otherwise, because once the polar bears started swimming all you could see were their noses, which could easily be mistaken for boulders sticking out of the water.

The group would see a couple more bears that evening as they paddled to their campsite — an island with minimal willow trees that polar bears could be lurking behind. They took turns on polar bear-watch, on guard for three-hour shifts at a time. No more bears made an appearance that night, though the paddlers would see about 15 over the next two days.

The two-week trek up the Seal River in the summer of 2020 was a trip of a lifetime for Wintoniw.

She’s hoping many more paddlers will be able to experience it thanks to an initiative to establish an Indigenous Protected Area that would conserve the entire 50,000 square kilometre Seal River Watershed.

Sayisi Dene First Nation is leading the initiative in partnership with its Cree, Dene and Inuit neighbours. Partnership and support for the project is also provided by CPAWS Manitoba and the Indigenous Leadership Initiative. 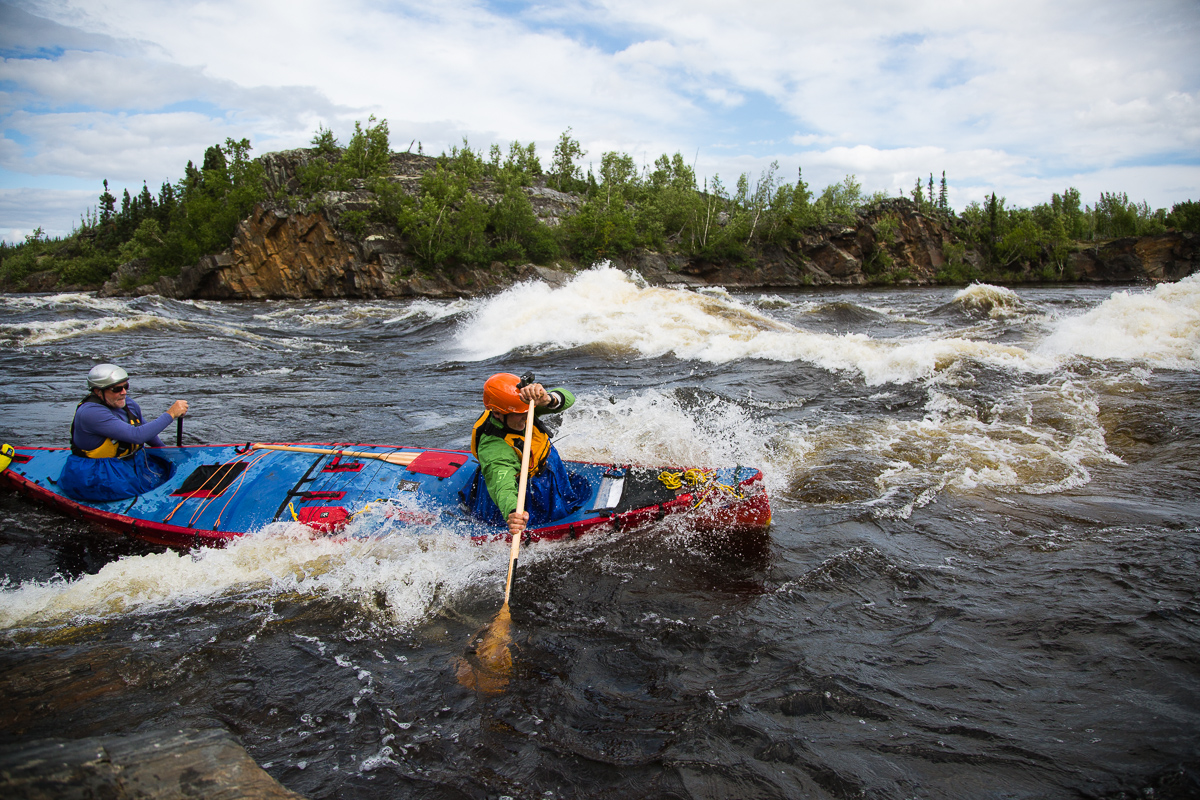 The Seal River has challenging stretches of whitewater. Photo by Caroline Wintoniw.

The pristine watershed is full of life, including at least 23 known species at risk, such as polar bears, beluga whales and wolverines. There are no permanent roads. No mines. No industrial development of any kind.

The remoteness of the watershed poses some logistical challenges for paddlers.

Wintoniw’s group shipped their canoes up to Tadoule Lake, the community where they started their journey, on ice roads in March. Seal River Alliance Executive Director Ernie Bussidor graciously stored the canoes in his yard until the team arrived in August.

To save on freight cost for their food and gear, the paddle team drove 750 kilometres to Thompson before boarding a flight to Tadoule Lake, where they were warmly welcomed by community members.

Going into the trip, Wintoniw was pretty confident with her paddling skills, which was needed for the whitewater on the river. Since water levels were high that summer — in some areas rapids became small waves, while in other areas the water moved especially fast. The paddlers had spray skirts on their boats so they could travel through rapids without water entering their boats.

Besides incredible runs of whitewater, the crew was treated to the beauty of the Seal River Watershed, including sightings of seals and polar bears and views of forests, massive eskers (ridges of gravel or sand deposited from retreating glaciers) and tundra.

On the final day of their adventure, just as the paddlers were about to head out into Hudson Bay where a boat would pick them up, one of them pointed at the open water: what looked like waves in the distance was a pod of beluga whales.

The group paddled out, becoming surrounded by hundreds of belugas, a final treat to mark the end of the team’s voyage. 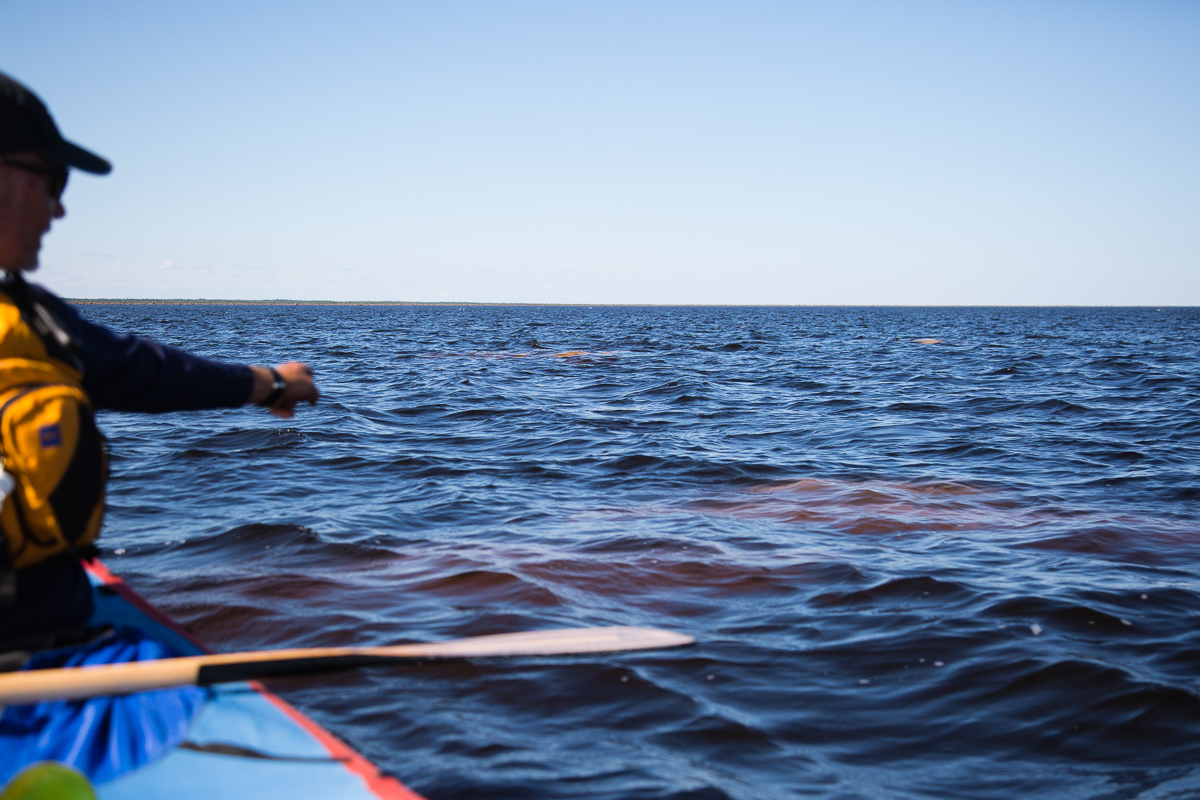 A paddler points to the many beluga whales surrounding the group. Photo by Caroline Wintoniw.

“So much growth happens during wilderness trips,” Wintoniw said. “You are often being pushed outside of your comfort zone, whether it’s paddling next to polar bears, paddling next to eight-foot waves or being eaten by black flies. I always come home from wilderness trips with a deep sense of accomplishment and always a new appreciation for the little things in life, like dry shoes.”

Take action to show your support for protecting the watershed: bit.ly/SealWatershed.