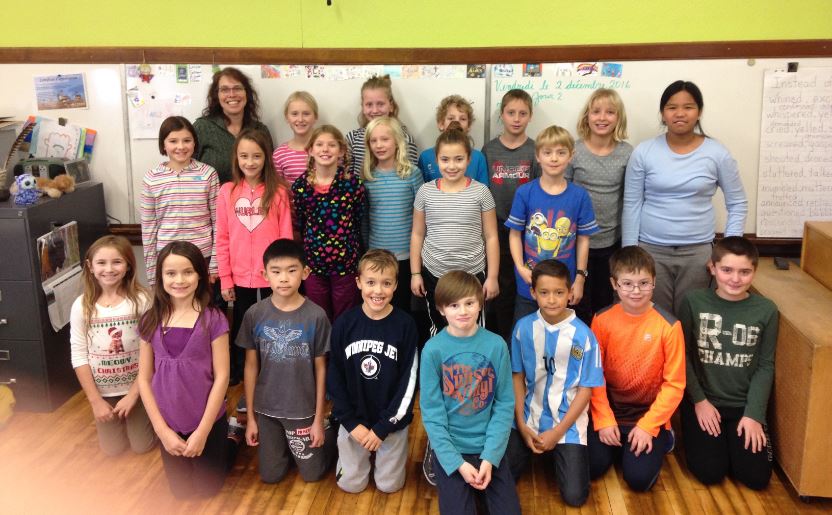 CPAWS Manitoba is always thrilled to receive invitations from educators and students to join them in the classroom and discuss boreal conservation in Manitoba. The experience is often both humbling and energizing. This proved to be the case when we were fortunate enough to meet with the enthusiastic grade 3 & 4 students in Mme. Annette Danis’ French Immersion class at École Riverview.

‘The passion of young people in this province is something that continues to motivate our commitment to conservation. We are given incredible hope by this next generation of conservation leaders already active and dedicated to doing their part for nature.’ says CPAWS Manitoba Executive Director, Ron Thiessen.

Along with dedicated volunteer Jazz, CPAWS brought a French language presentation on woodland caribou in Manitoba. Though our visit gave them an understanding of caribou conservation, Danis had her students explore the other campaign areas we work in with the goal of helping us spread awareness for our initiatives.

‘’At the time, there were seven campaigns listed on the CPAWS Manitoba website so I divided the class into groups and assigned one of the seven projects to each. The group members worked together to present their information to other members of their group initially to consolidate their findings, and then to the class who then voted on their favourite projects.’’

The Seal River Watershed became their main focus with the students working to provide beautiful, visual and written information on large posters decorating the school hallways to educate the other students and staff. As well, many provided their voice for infomercials as part of the morning announcements over a three-week period to reinforce the ideas being discussed on the school-wide posters.

Upon realizing CPAWS relies on private donations and grants rather than government funding, ‘it seemed natural that we should fundraise.’’ says Danis.

To complete the learning unit, the students organized a fundraiser with each student providing homemade baked goods. The sale was a huge success with the class raising $624 towards CPAWS efforts to protect the Seal RiverWatershed.

‘’The best part of this project was the overall effect on the students’’ Danis notes after learning that since their experience in her class,  some of these students have connected with CPAWS independently to help raise further support for the conservation work that we do.

‘My students have developed an awareness of environmental issues regarding habitat preservation right here in their province, and a genuine compassion for animals and habitats being affected by human expansion and exploitation.’’

With the help of a generous design volunteer, CPAWS Manitoba is using the much needed funds to print educational maps of the Seal River Watershed. These will be distributed to educators  and decision makers throughout the province to raise awareness of the conservation opportunity in the Seal River region and to help us inspire a new generation of conservation leaders.