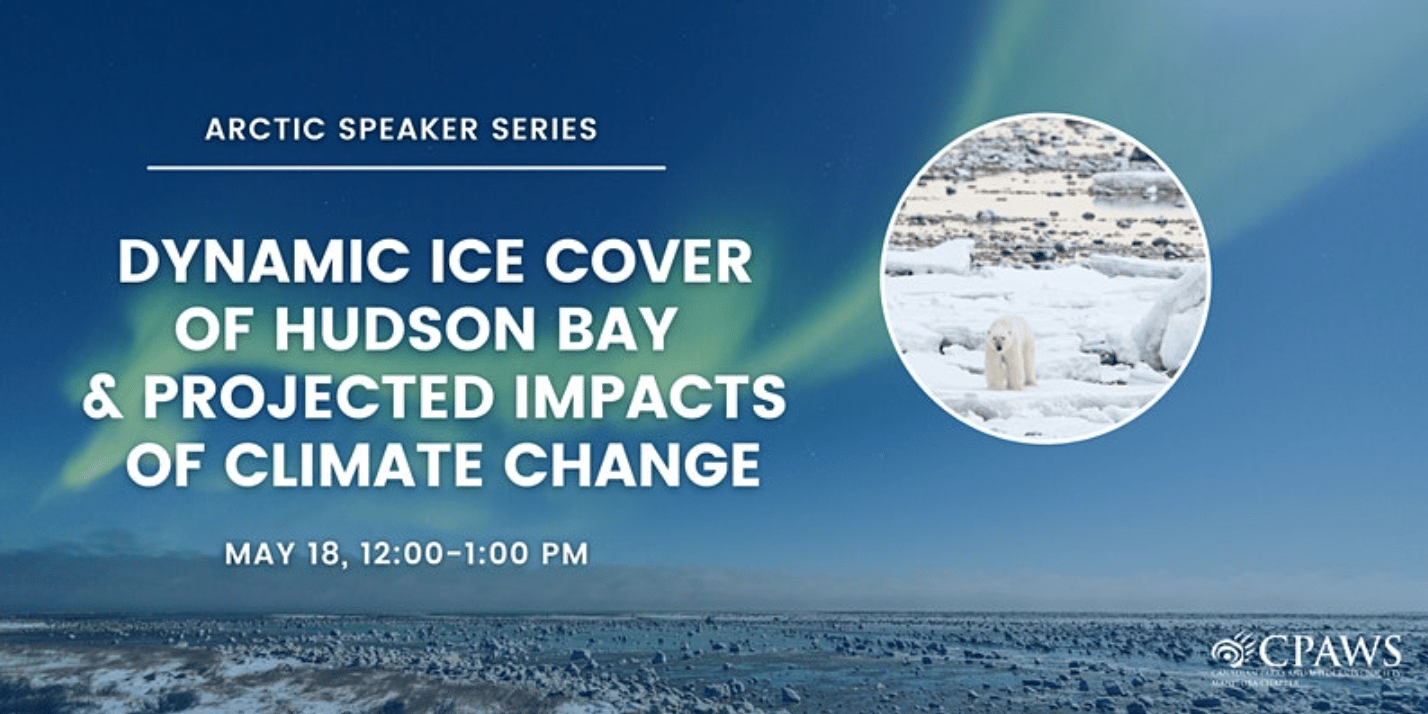 What trends have researchers noticed in Hudson Bay’s sea ice cover? And what does it mean for polar bears and other wildlife in the area?

Researchers have noted observable trends in the timing of the fall freeze-up and spring breakup of sea ice in Hudson Bay.

But what does this mean for wildlife in the region, including Manitoba’s population of polar bears, who rely on the formation of sea ice to be able to travel, hunt, and mate? And how will climate change affect sea ice cover in the coming years?

Join us for a CPAWS Manitoba webinar with David Babb, PhD Student and Research Associate in the Centre for Earth Observation Science at the University of Manitoba, who explains his research on the seasonal ice pack that forms annually across the greater Hudson Bay marine region.

Historically, very little research had been done on sea ice in the area, despite the fact that it comprises approximately 10 per cent of the total sea ice area in the northern hemisphere and serves as a travel route for the surrounding Inuit communities.

Sea ice cover also impacts shipping traffic to the communities and mines around the region and the Port of Churchill and provides a habitat for wildlife throughout the region.

David discusses how he and his colleagues at the University of Manitoba use modern observing systems and unique in situ observations from various field campaigns to take a closer look at the ice cover.

He highlights some of their findings, including the patterns and trends in the timing of fall freeze-up and spring breakup, the formation and expansion of landfast ice in coastal areas, the dynamic processes that create a heavily deformed and thick ice cover in the region, and the role of a large polynya (area of open water) in western Hudson Bay on the regional ice pack.

He also discusses the future impacts of climate change on sea ice in Hudson Bay.

This webinar is part of CPAWS Manitoba‘s Arctic Speaker Series, which explores the research being done in Manitoba’s Arctic and subarctic regions and highlights the global importance of the area.

Manitoba’s north is a significant wildlife habitat, home to some of the largest concentrations of beluga whales and polar bears on the planet, along with hundreds of species of birds that nest along the coast of Western Hudson Bay. CPAWS Manitoba supports the safeguarding of these wild spaces and species through its Western Hudson Bay NMCA and Hudson Bay Lowlands IPCA initiatives.

David is a PhD Student and Research Associate in the Centre for Earth Observation Science at the University of Manitoba where he studies Arctic sea ice. Using a combination of in situ, remotely sensed, and modelled datasets, David studies sea ice dynamics, specifically the motion, thickness, and overall physical properties of sea ice.

David has been studying sea ice throughout the Canadian Arctic for over a decade, but has been focused on the seasonal ice pack in Hudson Bay for the last several years. Recently David was involved with writing a chapter on the Polar Regions for the IPCC’s Sixth Assessment Report (AR6).

How can we help?

If you have any questions or require any additional accommodations to participate, please email us at [email protected].

*** This program is possible thanks to the generous support of The Winnipeg Foundation and the Conservation Trust, a Manitoba Climate and Green Plan Initiative delivered by the Manitoba Habitat Heritage Corporation. ***