Parasites can have a drastic impact on moose populations. Brain worm is a parasite commonly carried by white-tailed deer with no impact on their health. But it usually kills moose and caribou. Symptoms include: disorientation, stumbling, extreme weakness and the inability to stand. 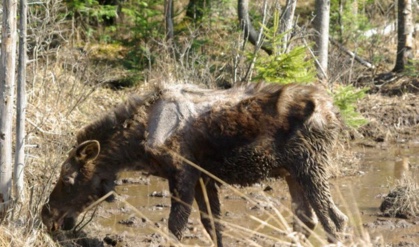 Winter tick is a common parasite that feeds on moose during winter months. When an infestation is heavy, moose can be weakened by loss of blood and can suffer cold stress from hair loss as they try to rub the ticks off their bodies.

Habitat disturbances like roads and hydro lines draw more deer into moose territory. As deer are the primary carrier of brain worm, this introduces the fatal parasites to areas of moose habitat where it was previously absent.

Cold winters can keep parasites and disease carriers in check. The boreal has experienced 10 winters with higher than normal temperatures since 1997. This trend is expected to worsen as a result of climate change.

Milder winters lead to an increase in winter ticks, which survive the cold by attaching themselves to mammals until springtime. A later first snowfall offers ticks more opportunities to attach to a moose. An earlier spring snowmelt increases the likelihood that a female tick will successfully lay her eggs after dropping from the host.

The milder winters associated with climate change also appears to be influencing the expansion of deer to more northern habitats. Where deer go, brain worm follows.